At Talis we have a distributed team. We have people in multiple countries, in different timezones and supporting everyone is a problem we have to solve. We’re always looking for ways to improve how we go about communicating between the teams and ensuring everyone feels included.

Our latest Hackday focused on this - making it easier for remote workers to connect, not just with other remotees, but with their office-bound colleagues.

We’ve talked previously about our format for hackdays, this one was no different - the team I worked on was assigned the following projects:

Here is a quick run-down of how we tackled each one.

Chromeboxes are ace - hook them up to a TV and voila, you have video conferencing via Google Hangouts. We have them installed in a number of offices, but we wondered if we could cobble some old equipment together and plug them into offices where we don’t. 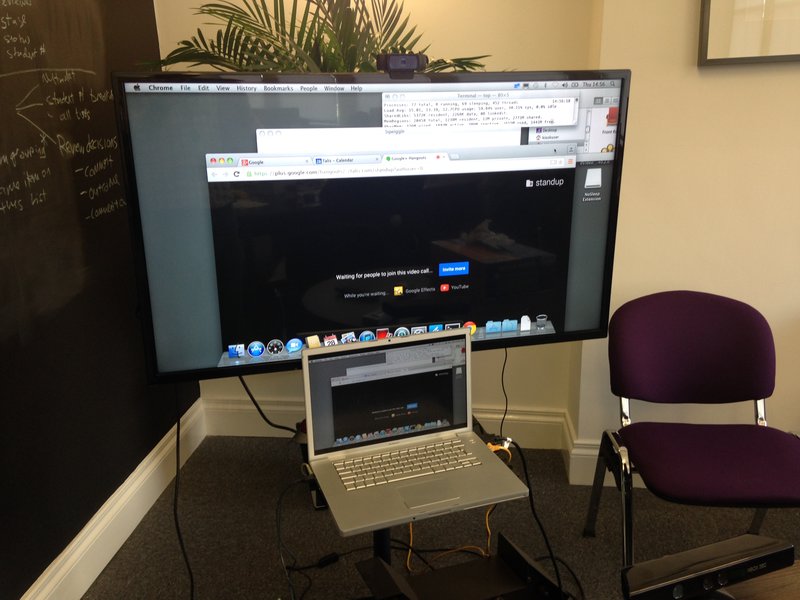 And that was about it. The camera worked, the microphone worked. We started a Hangout first thing in the morning and anyone was welcome to join it during the day. The video quality was ok - that was more to do with the laptop rather than the camera, the only downside hardware wise was that the USB cable for the mic wasn’t long enough - a Bluetooth one would be a good upgrade. One other thing to note here are the restrictions on Hangouts themselves - 8-9 hours for a single video call and a max of 10 (15 with Google Apps for Work) participants.

We use a lot of tools at Talis - Google Hangouts, HipChat, Trello, Box and Google Drive to name just a few, but it’s been a while since we really spent time looking for anything new, or better - so here’s a couple we found and thought worked well.

I’d read an article from Buffer about tools they find useful for remote working. One that stood out to me was Sqwiggle - the ability to see colleagues at their desks in near real-time was something I thought would be really valuable.

We persuaded as many users to install it as we could, as well as loading it onto a TV mounted on the office wall to see if it made any impact to our working lives. 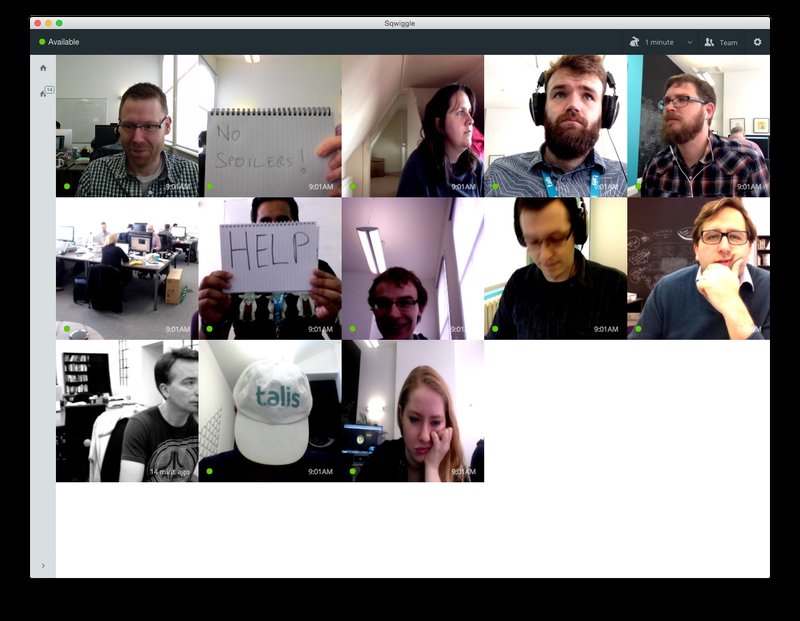 The short answer was that it did, it gave everyone the human contact that you take for granted when you’re sat next to someone. By having that window to your world always visible, it really brought everyone into the office (and vice versa). The only downside is that you do have to careful now if you’re hiding behind the curtains (yes that’s you Zena!), or having a good yawn and stretch (JB!).

We’ve recently painted some of our walls in the office with blackboard paint. It makes for a great alternative to whiteboards - but it’s not so good for anyone outside of commuting distance. 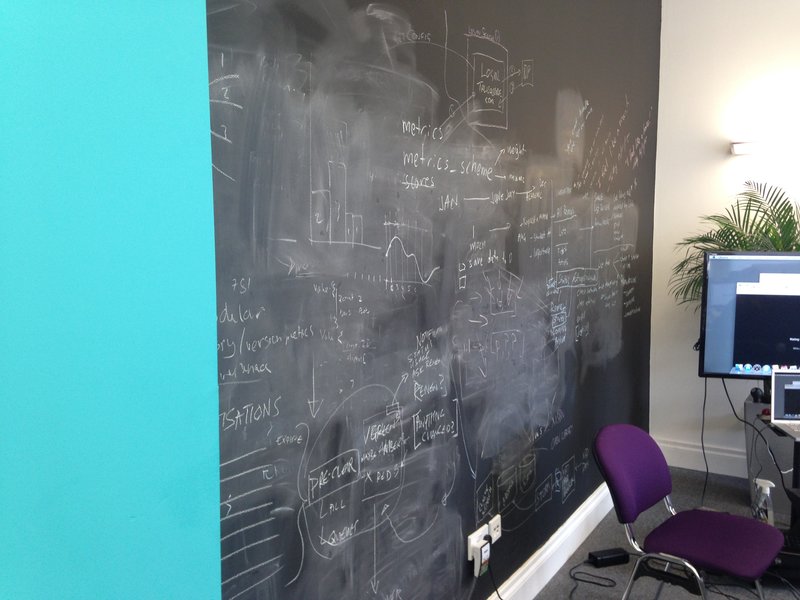 One suggestion was to find a digital whiteboard solution where everyone can see what is being explained and join in collaboratively. There are loads of online solutions, but we tried out Realtime board - it worked really well via a web app or a tablet, although not at all on mobile.

This is one to watch as we continue to trial - it may become one of the defacto tools that we use.

Is someone available to be disturbed?

Easy to tell if you’re sat next to someone but a different story if you’re in the American South East and you want to ask a question of someone at their desk inside Talis HQ.

The idea with this project was to have a camera installed in each office, with a remote worker able to see who was in and who wasn’t.

Turns out, we’d already completed this project! We had a video camera in place at the end of the office via the DIY Chromebox project and by installing Sqwiggle on the laptop connected to the TV, we got a window to the Sega studio for free.

The general consensus is that these tools and hacks have helped both remote and office workers alike.

Everyone can see who is at their desk irrespective of location, remote-ables can hear and see what is going on in the various offices, join in conversations and we’ve got some improved tooling for collaboration.

We’ll continue to monitor these tools as we use them and if we find more we’ll be sure to let you know.